Ye A.O.F.B. and the Sotwell Connection

Towards the end of a long working life, one of the King’s surgeons, Sir Alfred Fripp, performed a successful abdominal operation on a 45-year-old silk merchant named Bert Temple. On his recovery, in September, 1924, he called on Sir Alfred at his home in to outline his plan to raise £100 for the Invalid Children’s Aid Association, the Hackney Branch of which the surgeon had set up some twenty years earlier, raising large sums of money from wealthy patients and subscriptions. Bert’s idea was to get his friends and acquaintances to pay him 5/- ( shillings ) to join his spoof fraternity, Ye Ancient Order of Froth Blowers; in return they would get a membership card with some comical requirements for them to adhere to and some cuff-links. I do not suppose Fripp was over-optimistic about his chances of receiving this gift (large for the time). However, after a year of persuasion, coupled with moneys raised by fines at monthly dinners, Bert duly delivered the promised amount.

It would appear that, as he was about disband the AOFB, three people previously unknown to Bert – Clarence Moss in Southsea (enrolling naval men), Jack Haes at the Stock Exchange, and David Henry Cain  (the Editor of the Sporting Times) – separately arrived at the conclusion that this was a hoot, and proceeded to enrol people by the thousands. Three years later, at the end of 1928, almost 700,000 men and women - and some of their children and their dogs – had received their booklet (replacing the card) and their cuff-links or wristlets. Sir Alfred and Lady Fripp had been able to distribute some of the proceeds (of around £100,000) to the ‘Wee Waifs’ of the East End of London. However, the unexpected bonanza was so great that large projects were undertaken: in particular, endowments of beds for children’s hospitals in different parts of the country, a hospital in West Wickham – with a Guide hut in the grounds named ‘Heartsease’ (still with an A. O. F. B. connection today) – and a convalescent home here, in Brightwell-cum-Sotwell.

In the year 2000 a Son et Lumiere commemoration of the connection of the village to the East End of London was acted out in St Agatha’s Church as Tableau 26 of a “Brief History of Brightwell”. It was entitled:

A portrait of Fripp was given by him to his friend, the local G.P., Dr. Harry Watts, whose idea the convalescent home was, with the words, ”With all good wishes, Oct. ‘28”. The writer of the ‘Brief History’ went on to say that the home “nursed back to health over 850 boys before it eventually closed in 1936.” 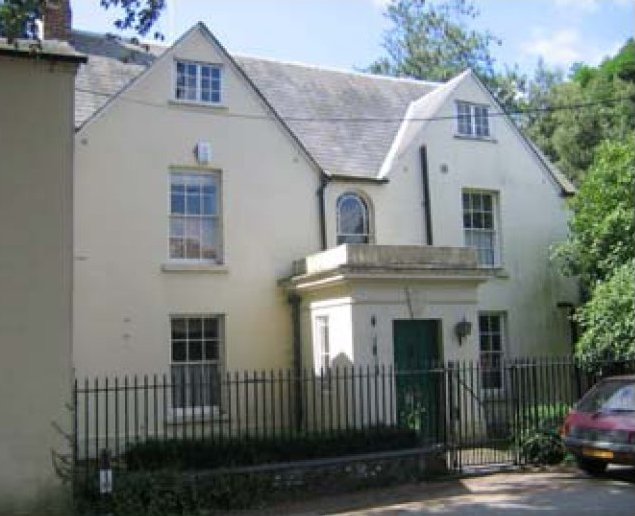 Interestingly, in 2007, the Friends of the Froth Blowers received a comment via the Pub History Society  ‘Guestbook’ from Elizabeth Ray, who wrote: “My maternal great-grandmother, Martha Harris, ran a home for lads in Brightwell-cum-Sotwell in the 1920’s. My mother lived there for a short period and can vaguely remember Sir Alfred Fripp and Dr. Watts.”

According to the Henley Standard of the time, in July, 1927, there were 22 boys in the Home convalescing from pleurisy, rheumatic fever and the other debilitating diseases of poverty and poor diet. Obviously, some important dignitaries connected with the AOFB – in particular, Sir Alfred himself – decided that it was time to visit . He appears to have been accompanied by one of the three other main Committee men, Cloudburst Jack Haes ( and Cain being the other two). Three local AOFB’s accompanied them: Blaster Fred Leftly (possibly, of the , ) and Blowers Axtell and Willis – which gentlemen before dinner, “entertained the residents with a rendition of Onward Christian Soldiers and The Froth Blowers Anthem before sitting down to dine.” The report continued, “The guests stated their intention to pay more visits to entertain the lads and also said they would strive to raise the cost of long capes and goloshers (sic) for them.” The full article is below.

JUST WHO WERE THE ANCIENT ORDER OF FROTH BLOWERS?
Browsing through some ancient back numbers of the Standard the other day, I stumbled across one of those stories that leaves you wanting to know more.
In July in 1927 we reported on the good work of an organisation by the name of the Ancient Order of Froth Blowers!
The good Blowers established a convalescent home at Brightwell-cum-Sotwell, near Wallingford, for ‘wee waifs and strays’ and in that month a group of them paid a visit to the home, which at the time played host to 22 youngsters.
The party consisted of the wonderfully named Sir Alfred Fripp, who boasted the title of Frothblower No.1, Cloudburst Jack Haes, Blaster Fred Leftly of Henley and Blowers A. Axtell and E. Willis.
Before dinner, the Blowers entertained the residents with a rendition of Onward Christian Soldiers and The Froth Blowers Anthem before sitting down to dine. The guests stated their intention to pay more visits to cheer and entertain the lads and also said they would strive to raise the cost of long capes and goloshers for them.
So just who were these Froth Blowers? Where did they hang out? How was the money raised? What happened to the home?
Not for the first time, dear readers, just what was that all about?”


Before I knew him, and before I had formed the Friends of the Froth Blowers (in September, 2005), Chris Murray (a founder-member of the F.O.F.B.) replied, and the information he supplied about the A.O.F.B. was printed the following month, under the heading: “BE DAMNED TO PUSSYFOOT HORNSWOGGLERS” . Full article is below. Article reproduced by kind permission of David Dawson, News Editor of the Henley Standard.www.henley-on-thames.com

'BE DAMNED TO ALL PUSSYFOOT HORNSWOGGLERS'

All has been revealed. Two weeks ago I brought you news of the Ancient Order of Froth Blowers who had established a home for waifs and strays at Brightwell-cum-Sotwell and asked if any reader could enlighten me to the background of this body of men.

So my thanks go to Chris Murray who writes from London with news of the Order. They were in their hey-day back in the ’20s and were dedicated not only to promoting goodwill, but to having a good time. In their handbook they described themselves as ‘a sociable and law abiding fraternity of absorptive Britons who sedately consume and quietly enjoy with commendable regularity and frequention the truly British malted beverage, as did their forbears and Britons every will, and be damned to all pussyfoot hornswogglers from overseas and including lowbrows, teetotallers and MPs and not excluding nosy parkers, mock religious busybodies and suburban fool hens all of which are structurally solid bone from chin up.”
Their meetings must indeed have been lively affairs which took the form of ‘general business, gargling and mutual recriminations, followed by singing, fights and diversions generally’. To supplement the funds, fines were imposed for such misdemeanours as late attendance, moaning at the bar, early retirement, breaking furniture and throwing bread, corks or pianos at the senior Blower! Members were given titles dependant on how many new Blowers they could recruit. One hundred members made them a Tornado, 500 members a Monsoon, 1,000 a Grand Typhoon and, if they introduced 2,000, they became a Cloud Burst. Blowers wore with great pride cufflinks enamelled with AOFB and most would have had their own beer mug with the same initials. Their badge depicted a young child stretching upwards towards a portly gentleman who is blowing the froth from a foaming tankard of ale.
Sadly, the Order seemed to sink without trace after the Second World War, but by then they had established groups throughout the country and raised thousands of pounds for various charities.
“BE DAMNED TO PUSSYFOOT HORNSWOGGLERS” was part of Bert Temple’s now (and then) famous diatribe against teetotallers at home and abroad.  As there were 32 pages of stuff like this - most of it less  vitriolic but equally forthright – it is not surprising that drinkers and non-drinkers with a sense of humour (and a sense of their Britishness) joined in their thousands in every part of the English speaking world – or parts where our presence was felt, from Tientsin to Patagonia.

In 2011, “A Brief History of Brightwell” was re-enacted, so the local community do not, perhaps, need our help to keep the memory of the Froth Blowers alive; but, just in case, I hereby declare the Red Lion to be an F.O.F.B. Vat, and for Sue Robson to be a Fairy Belle of the Order. 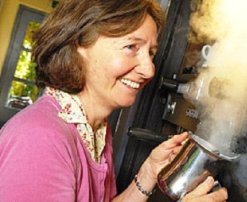 A  F.O.F.B. Vat is required to hold at least one event a year to raise money for a local children’s charity.

On the 8th October 2011 the F.O.F.B. held their 6th Annual Re-Union at the Red Lion in Brightwell-cum-Sotwell. The Red Lion was awarded F.O.F.B Vat status and the landlady Sue Robson duly declared a Fairy Belle and presented with a Fairy Belle wristlet. 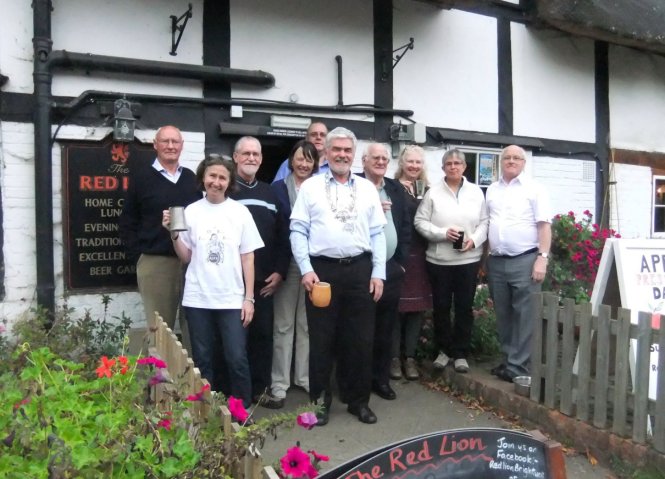 Some of the F.O.F.B.'s assembled outside the Red Lion, Brightwell-cum-Sotwell.
Back to Home
Go to Regalia / Merchandise